You are currently viewing only those items made visible to the public. Click here to sign in and view the full catalogue.

SimMan is a full body, adult manikin that allows the simulation of Basic and Advanced Life Support Skills and Assessment to develop both individual and team skills.

The simulator allows observation and recognition of most vital signs which are used in emergency medicine either directly on the manikin itself or on the included simulated Patient Monitor. When used correctly, these features will support the students’ competence ability to reach the correct diagnosis based on active observation as opposed to being prompted by instructor cues. The patient monitor also doubles as display for other functions, such as display of 12-lead ECG and X-rays.

The manikin allows for most relevant medical intervention to be performed according to their medical guidelines and protocols. The Laerdal SimMan contains an advanced airway allowing for simulation of difficult airway management cases. The anatomy can be changed during the scenario (via remote control) to indicate changes to the patient condition or as a response to students’ intervention. Correct form and technique are required to perform direct laryngoscopy and endotracheal intubation. Correct use of a variety of airway adjuncts will successfully ventilate the patient simulator.

SimMan is delivered with a set of normal pupils inserted in the head's eye sockets and a separate case containing 3 sets of replacement pupils (normal, constricted, dilated) for simulation of various medical conditions. The simulated patient monitor is a replication of the Philips IntelliVue patient monitor, which includes the ability to set up the screen layout in various ways. It also allows configuration outside the IntelliVue’s features to mimic other patient monitor types as well.

SimMan is operated through a Software (SW) which runs on a PC. Interaction with the SW is done through a Graphical User Interface (GUI) where the various vital signs parameters are changed directly or through pre-programmed scenarios. The SW also allows automatic and manual logging of scenario events as well as video capture. The events logged during a scenario can be shown in a debrief viewer together with video capture. The log is synchronized with the video capture. This allows the instructor to review both the log and actual performance during debriefing. The debrief can also be stored for later review. 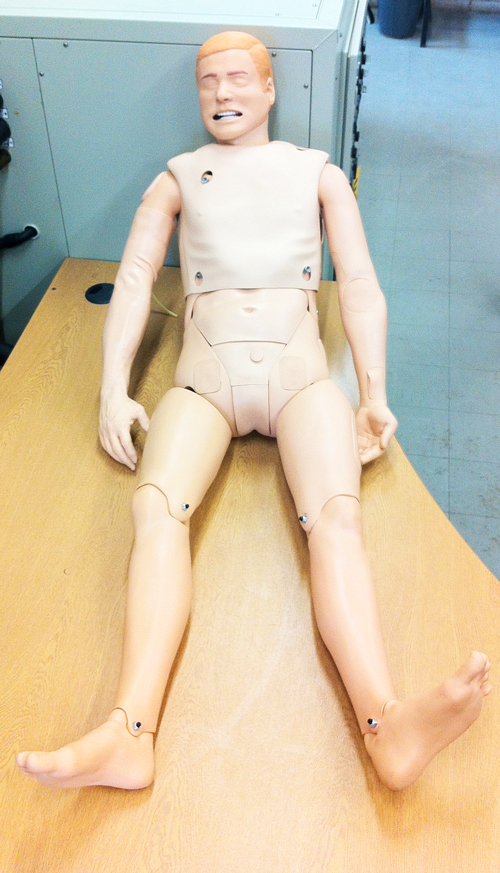